skip to main | skip to sidebar

The goto diner in Fredericksburg is Andy's and it was not as scruffy as I had hoped, but it was good. Then a stop at the tourist info place and watched a movie about the history of the town.
We had a big miles day so off we went across what started as pretty rolling, grassy Texas and ended in dry scrub and lots of oil / gas drilling. Half way into the day we started noticing a lot of truck traffic on the small two lane roads. We finally started to see drill rigs, oil pumpers and gas lines everywhere. When Deb started looking for motels in Carlsbad, she noticed the prices were high and when we got there, we realized the town was over-run with oil/gas field workers. This town is in a boom, much like Williston ND and parts of Pennsylvania. 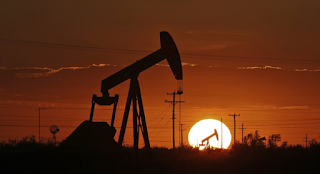 We did get a room, but we look out of place not driving a big pickup truck. The woman checking us in said they can't keep the grocery stores stocked since there are so many people in town the last three years. She said the town population went from 36K to 93K in three years. She gave us a place to eat with a good salad bar and we got there early enough to miss the crowd. We chatted up a couple at the next table who were working in the new boom and they filled us in. The can make as much in three months as they used to make in a year. They tried retiring but came back to do a short stretch which turned into a year. One of their sons works near here and started a business with just he and his wife three years ago and now has 50 employees. Nice weather, nice drive, nice day.

Posted by Beemerboys at 7:06 PM No comments: 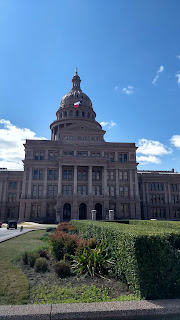 Today we tour Austin TX, after hearing so much about it. It is the capital and is about a million people. We found the Train station and parked the car (free), got two $7 all day tickets and hopped on the train. 45 minute ride into the downtown stop and then walk around from there. We hoofed it to the Capital building which is big (this is Texas), and got a free tour of the building, history, etc. The House only meets every two years and this is an off year so not a lot going on. The center is a a giant silo that lets you see all the way to the top of the dome. The guide says if you take the Statue of Liberty off the stone base, it would fit inside. This is Texas. 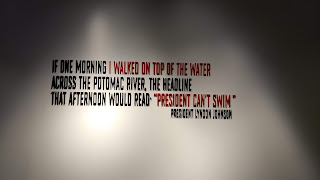 We then walked to the LBJ Library / Museum. The 3rd, 4th and 10th floors are the museum and the reset are the library / admin. LBJ was pretty colorful and got a lot done because he was a workaholic and figure out how to use the telephone day and night to push legislation through. He was a democrat and wanted to finish of the social programs that FDR had started. They did not sugar coat the failure of the Vietnam War and how it overshadowed all the good things he did. He could not end the war.

Back on the street and down to Congress Street which is the old part of the city and found a coffee shop to rest our feet in the nice afternoon sun. We got back on the train and 45 minutes later were in the car and headed out of town. Fredericksburg TX was about the right distance to call it a day. This town was founded by German immigrants in the 1840's and it is a big tourist town (10K people). Lots of stone buildings and everything well groomed. Lots of things for tourists to do.

Posted by Beemerboys at 6:49 PM No comments:

The bartender last night gave us a couple places to check out to buy weird Cajun food. We stopped at one which was closed (Fat Tuesday) and the second one was open so we picked up a slice of  King's Cake (tradition cake with a baby in the middle (look it up). The third place had the best assortment. King;s Cake, Boudin Balls, Alligator meat, bacon wrapped everything you could think of for the grill, and all kinds of meat ready to slap on a grill. Nice lady explained it all. Wicked accents in there. 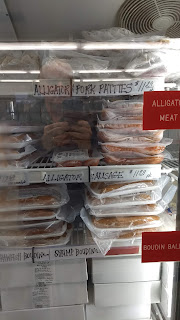 The back on the highway to Texas. It got less swampy and more rolling green pastures as we got to Texas. Podcasts help burn the day up and next thing we knew we were in Austin checking in to the hotel. Mexican place a couple miles away and Deb chatted up a local real estate guy who gave us some tips on taking the train into Austin and things to see. Laundry tonight.

Posted by Beemerboys at 8:09 PM No comments:

We stayed a little north of Mobile last night and this morning chatted with an older woman from Philadelphia who flew down with her friend to go to Mardi Gras in Mobile. So we decided to drive through the historic downtown and check it out on our way west. Pretty easy getting to Dauphin Street and they already had the barricades up, people were already starting to line up to see the first parade of the day. Deb hunted down some tea while I chatted up the motorcycle police guys (Harleys). Sounds like a crazy week, but not as crazy as New Orleans. We ran into nobody that recommended being in New Orleans for Marti Gras. "Not family friendly" we heard over and over. Most towns seem to have their own parades and everything seems to close on Fat Tuesday. So the motorcycle police said we should get our car out in the next half hour before they start towing. They got this down. So off to the highway (Rt10) and west to Louisiana. 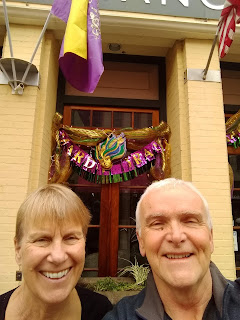 Every state we stop if there is an information place to get the official state map (if we don't already have it) and we stop for coffee / tea / bathroom breaks as required. Lafayette LA was out destination today and it poured buckets the last couple hours. We found and outdoor Aradian Village and ducked from building to building with our raincoats. Next time we bring an umbrella..
Checked in at the hotel and walked down the street to the Blue Dog Cafe for Cajun food (Crayfish enchiladas, Boudin Balls (rive and sausage balls deep fat fried) and beignets (powder donuts with butter/cane sugar dipping sauce). There is all kinds of traditional food down here we never heard of.

Posted by Beemerboys at 8:07 PM No comments:

We crawled through beach towns all day. This is known as the Redneck Riviera and it looks like a fun series of beach towns with lots of quirky stuff for kids. Mini golf, go-carts, Ripleys Believe It or Not, T-shirt shops, the works. And most of all, there is endless pure white sand beaches, beautiful clean beaches. It seems to be all public beach and different levels of access depending on the town. 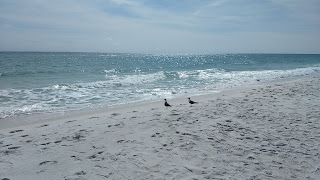 Some towns lots of access with parking, paths down to the shore, etc, and some towns build houses so close together, there really is no way to get to the beach. We found a nice State Park with full access to one of the nicest beaches we saw all day. 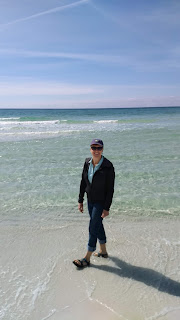 We hit every road we could find that ran right next to the gulf and finally had to call it a day heading north to Mobile. Great oyster place (since 1938) next door and wicked friendly folks. We got the impression that Martic Gras is celbrated in every town near here so hotel rooms are more scarce.

Posted by Beemerboys at 7:03 PM No comments:

We had a lovely dinner last night with friends (Dana & Robin) and they mentioned the natural springs all over Florida and specifically Ichetucknee Springs State Park. It turned out right on the way so we headed there, rented a canoe, and paddled down the 2 hour river that the spring feeds. Perfectly clear water with fish, turtles and birds all around us. A perfect sunny day (and a lot warmer) and not busy and perfectly quiet. 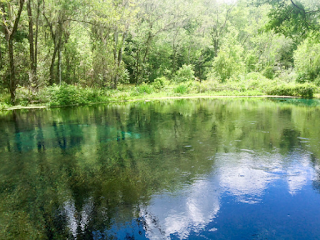 Then on to Panama City which is right on the gulf coast and sets us up for crawling along the coast the next day. Another sunny day!

Posted by Beemerboys at 6:49 PM No comments: 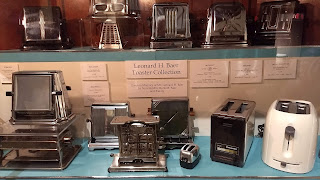 Today we go to St Augustine FL and just snoop around. We got there early enough that we could take the trolley tour (off and on bus) which is a great format for figuing out the town history. The Spanish were around from the mid 1500's and then the English showed up in the early 1700's and the Americans took over after the revolution. And then of course the Civil War, which we did not get a good historical sense of other than how the Castillo de San Marco (fort) was used during it. The fort is the historical anchor in the town and the Spanish built it originally. It was made of coquina which is like what they used up north (called Tabby). They mix sand, water, oyster shells and lime (made from burned oyster shells) together to make cement. 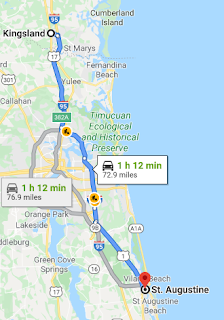 They claimed that this was the coldest day of the year with temps in the 40's and a very strong wind all day, so we got a couple hot drink stops in. We also visited the Lightner Museum which another rich guy named Lightner created. Very eclectic collection of stuff he bought. Paintings, musical machines, cut glass, toasters (yup, toasters), model boats, scientific instruments (microscopes, etc). The product of a really rich, very curious guy.
The town also has Ponce de Leon (Fountain of Youth guy) statues all over, and tacky stuff like Ripleys Believe it or not (think two headed calves).
All in all a fun town and lots of history cleared up (kinda).

Posted by Beemerboys at 6:37 PM No comments: